Is Team India headed in the same direction in the T20 World Cup 2010 as it had in 2009? Will all the Super 8 matches be lost? If yesterday’s match – where India got literally barbecued by Australia – is any indication, India may just land in such a situation. What went wrong yesterday? First of all, let us list a few things that went right. Winning the toss (though on hindsight, opting for fielding turned out to be a wrong decision), a maiden first over, good bowling by Harbhajan Singh yielding only 15 runs in the designated 4 overs, the team giving away only 23 runs in the last 4 overs thereby restricting the Aussies to a total, way below 200 and Rohit Sharma’s blistering unbeaten 79. Everything else seemed to be a disaster.

The 2 pacers-2 spinners strategy proved to be all wrong. Dhoni’s contention, that ‘spin’ is India’s strength just like ‘pace’ is Australia’s strong point cannot be justified. The strength of spin should be used when the situation demands it and not just because we have good spinners. A fast track demands pace. However the 2 pace bowlers yesterday did not help much. Our star pacer Zaheer Khan gifted 45 runs in 4 overs. So the number as well as quality were found wanting in the ‘pace bowling’ department.

The supposedly strong Indian batting line-up was blown to smithereens by the marauding Aussies. And Dhoni’s excuse that facing the ‘short rising ball’ has been India’s weakness for 20 years now does not convince. It was a great embarrassment to have 9 batsmen, quite a few of them batting stalwarts, score single digits.

Ravindra Jadeja would want to wipe out this match from his memory. His batting score like most of his team mates was a poor 4. But more importantly, the 2 overs which he bowled yielded 38 runs with 6 back to back sixes, Shane Watson and David Warner hitting 3 each. This is after Jadeja dropped Watson on 7. The manner and the ease with which they hit sixes, may henceforth prompt the opposing team to ask for a bigger ground when Watson and Warner are batting.

That the Aussies have done their homework and have come fully prepared to fill the one empty space on their trophy shelf is plain for all to see. Team India will have to get its act right immediately. ‘Perform or perish’ will be the mantra in the next 2 matches against West Indies and Sri Lanka. 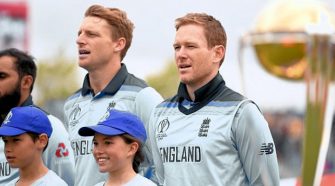