India won the inaugural twenty20 cricket world cup held in South Africa by defeating Pakistan in a thrilling encounter. South Africa conducted this tournament in the best possible way. Arch-rivals, India and Pakistan, played two most memorable matches in this world cup. My dream team is dominated by players from these countries due to sterling performance even though they lack experience in this format.Man of the tournament: Shahid Afridi.

1. Most exciting team to watch: India

2. Best match: India Vs Pakistan world cup final match. It is difficult to forget this final.

3. Stunning event: Australia was defeated by Zimbabwe in the group match.

4. Stunning Innings: Chris Gayle century in the first match of the tournament set the tone for this great tournament.

9. New star: Misbah-U-Haq- even though he failed at final hurdle, he is the back bone of Pakistan batting.

11. Umar Gul- Most consistent bowler of the tournament. 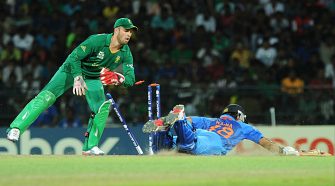