Australia have struggled to come to terms with the demands of Twenty20 cricket but are taking steps to ensure they will not be embarrassed again in the West Indies.

Michael Clarke will captain Australia squad for T20 world cup 2010 as Ricky Ponting, the Test & ODI captain, has quit the shortest format of the game. Michael Clarke has only lost 1 out of 5 Twenty20 games he has lead his team in, that too in super over, but since Australia have never won this tournament before, right hander will have a history to make.

Australians squad contains array of all-rounders and most of them have played few games for their country already, and should enjoy West Indies conditions where Australia won last world cup as well.

Brett Lee makes a comeback into Aussie side after an year devoted to injuries and test retirement. Dan Christian, the right hander is surprise pick over Travis Birt, the left handed hitting batting all-rounder. Leg spinner cum right handed batsman Steven Smith has had limited chances despite being on radar for almost 6 months now. Tim Paine, the backup wicket keeper to Brad Haddin, is a surprize pick in Australian squad of 15 while Michael Hussey makes a comeback after missing last few T20 games for his country.
Ryan Harris can consider himself very unfortunate to miss the chance to play at his first Twenty20 World Cup. He was named man of the series in the five one-day internationals against Pakistan earlier in the year, and took six wickets in his first test match against New Zealand this month.

Australia has been drawn in Group A alongside Pakistan and Bangladesh in the tournament which begins on April 30.

He is a huge asset in the Twenty20 competition where his heavy hitting is a big feature. In his days at New South Wales, Christian showed promise as a top-order batsman, but he fits in well in the middle of South Australia’s order.

He is T20 Australia team captain. He is a dependable batsman who can hit big shots to any bowler. There is no doubt over his importance to the team, but the next few years will determine how high he finishes in Australia’s batting hierarchy.

He bowls a good line and does a neat line in self-deprecation too: “There’s no flippers or anything exciting like that in my repertoire,” he professed a while back, “I’m just trying to get my leggie right.”

Shane Watson first had to beat his fragile body. Not through recurrences of back stress fractures, hamstring strains, calf problems, hip complaints, a dislocated shoulder or a suspected heart attack that turned out to be food poisoning. His alrounder performance in the IPL-1 inspired Royal Rajasthan to win the IPL. In the current IPL-3 his couple of good performance helped Rajasthan win the matches.

He was indispensable, shuffling around the one-day order, proving himself as a productive Test run-maker and slowly improving on his glovework. There were even a couple of Twenty20 captaincy engagements when Ponting, Clarke and Hussey were rested.

He made his Twenty20 international debut against India at the MCG and was not required to bat, but picked up a wicket with his handy offspin. Hussey was one of the big surprises in the Indian Premier League auction when Kolkata paid $625,000 to secure him – far more than the sums offered for his brother and Ricky Ponting.

Promoted to the Australian one-day team, he struggled after a strong 69 in his second game and was dropped, but remained in the Twenty20 plans. Despite the attention of the national selectors, he could not convince the state panel that he was worthy of a Sheffield Shield debut until a late reshuffle enabled him to play the final match of the season. He picked up 42 off 48 balls in a satisfying start and then headed to South Africa as a Twenty20 specialist in Australia’s squad. Shortly after he returned for the IPL and was named in the World Cup outfit.

Steven Smith made a promising start to his state career in 2007-08. In the Pura Cup he opened with 33 and began his FR Cup experience without batting, although he posted 35 in his second attempt. The biggest impact came in the Twenty20 tournament, where he finished the qualifying matches as the competition’s joint-highest wicket-taker with nine victims at a remarkable average of 5.33. He is an allrounder who bowls legspin and can bat high in the order.

Having grown up as a specialist opener, he has spent most of his time in the middle order with Australia and hasn’t complained. His team ethic is on display in the field, where he is a reliable catcher at gully and a regular encourager, and he is scrupulous at practice.

A talented top-order batsman and wicketkeeper, Tasmania’s Tim Paine was earmarked as next in line behind Brad Haddin.

A gentleman off the field, he was aggressive on it and rarely went over the top in comparison to his team-mates, although his bouncers at the tail-enders were uncomfortable viewing. Mostly he was a shining example to young players in all forms of the game. When retiring from Tests at the beginning of 2010 he hoped to prolong his career in the shorter forms.
His mediocre performance in the IPL-3 creates pressure on him. He need to stick to his basics of the bowling if need to make impact on the batsmen.

Johnson grew up as Australia’s most exciting fast-bowling prospect since Brett Lee first dyed his roots. Quick, tall – he’s 189cm – and talented, his best attribute is being a left-arm quick. Only the digging up of a blond legspinner can create more excitement in an Australian cricket scene that has had just three of this style of diamond – Bill Johnston, Alan Davidson and Bruce Reid – pass 100 Test wickets

After four breakthroughs in the opening one-dayer against the Proteas, he was chosen in every 50-over contest over two series, leading Australia’s wicket-takers in the United Arab Emirates. Hauritz, an Australian Under-19 captain, made his ODI debut at 20.

He is genuine dashing fast bowler. Shaun Tait’s shoulder-strong action slung him on to the 2005 Ashes tour, where he played two Tests ahead of his more celebrated South Australia team-mate Jason Gillespie, but it soon disrupted his quest for further international impact.

A genuinely quick left-arm bowler who can swing the ball late, Nannes collected 22 Pura Cup wickets at 28.54, although he was again part of a demoralised, unsuccessful Victoria side in the decider. There was more joy in the Twenty20, where he was instrumental in the Bushrangers winning the title.

A self-confessed “accidental cricketer”, he is also the son of Dutch migrant parents and his Dutch passport allowed him to play for Netherlands in the 2009 World Twenty20 after he missed out on being named in Australia’s squad. 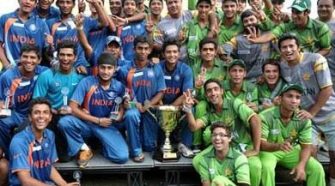