India defeated Pakistan in a thrilling group match of first 20-20 cricket world cup at Durban. In a entertaining match between traditional rivals, match tied after 20 overs. Bowling shootout was first time used in this world cup. India won 3-0 in the shootout as first 3 Pakistan bowlers failed to hit the stumps while all the 3 Indian bowlers succeeded in hitting the stumps.

Surprisingly, India never lost to Pakistan in a world cup match. Indians always played well in world cup matches whether Sachin show in 2003 or Jadeja brilliance in 1996 world cup. Dhoni team continues this tradition by keeping their nerves under control.

Wonderful fielding and controlled bowling by Indians helped to tie the match despite low score. Sreesanth bowled brilliantly in the last over.

You cannot keep a talented all-rounder outside the team for a long time. His performance reminded us of his early days in international cricketer. He performed remarkably well with both bat, ball and also in the field. He should be an automatic choice for an all-rounder slot in the next series against Australia.

Why Md. Asif is my favourite bowler along with Shane Bond?

I am tracking the progress of this genuine talent from his first series against India. It is difficult to forget his performance in that series. He is the new McGrath of international cricket. You can’t get loose balls in his overs and one should take risks to score against him. If he can keep his mind under control, he will take 400 wickets in international cricket. He rattled Indian top order with a wonderful spell.

Robin Uthappa is the new star of Indian cricket. He is consistently performing well in crucial games. He is playing superb shots against high quality attacks. He continued his form from NatWest series. His batting in crisis situations (both here and in England) is a lesson for every youngster.

Misbah-Ul-Haq! You have played wonderful strokes despite hiccups in the last 2 balls. This is an unforgettable innings in a high voltage game. He singlehandedly resurrected Pakistan innings when big stars like Younis, Malik and Afridi went back to pavilion. Keep it up.

India and Pakistan fielded young teams without stars like Sachin Tendulkar, Sourav Ganguly and Rahul Dravid. Dhoni has done justice to his captaincy with responsible batting.

This game will give much needed impetus to this tournament. First 20-20 cricket world cup is already a big success. Whether we like it or not, this is the future format of cricket. All-rounders like Flintoff and Pathan, new age cricketers like Pietersen and Uthappa will dominate the 20-20 cricket. You can’t survive in this game by slogging bowlers like Md. Asif and Shane Bond. 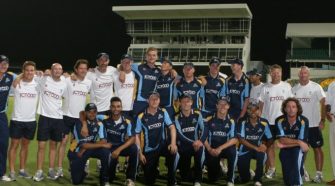